Screening Reports-asks the viewer to demonstrate a knowledge and understanding of the film and its relationship to a course topic.

Film Reviews-tasks the writer to supply an evaluative commentary in an info-taining manner, like what is published in Newsweek or Rolling Stone.

Formal Analyses are longer works that digs deeply into a more sustained and more complicated argument about a film, genre, or director.

This course asks you to create a hybrid that combines knowledge, research and analysis. In conclusion, the student is asked to supply a short evaluation of the overall film.

In conducting this analysis, the student should consider the following issues both before and after writing.

How can I communicate a familiarity with the film with specific examples from the film?

Have I developed concrete examples from the film, such as dialogue, shots, plot and characterization, to support my ideas?

Have I found research that answers the questions of relevance (so what?) and previous scholarship (says who?).

What are conventions of the genre? How does this film compare?

The thrust of the screening analysis is descriptive, although students may express limited opinions about what is interesting or valuable in the film. Avoid hyperbole and extreme judgments. It is far better to back up opinions or judgments with published information about the film from “experts”.

Recognize that not all readers have the same tastes. One writer might find Titanic thrillingly romantic; another might find it sickeningly sentimental. An adept reviewer might acknowledge this by saying “if you like shameless wallowing in old-fashioned rich-girl-poor-boy romance, you’ll love Titanic. For me, a little bit of schmaltz goes along way.”

The analysis must include A BRIEF PLOT SYNOPSIS, including main conflicts and character developments. Character names are followed by the actor’s name in parenthesis.

Mention striking aspects of the missing scene such as sets, costumes, visual qualities like color or scenic design, cutting, music, or acting. If adapted, explain the literary precedent.

These stylistic elements can be described separately, but are best woven into discussion of the plot or characters, or the production team (producer/director, director of photography, production designer, art director, and/or editor, and score/music composer).

Often comparisons are made with the director’s filmography, or with others of the same genre. When critical remarks are made, make them with brevity and make them memorable.

There is a half-minute bit in Twelve Angry Men in which the halo-wearing minority vote on the jury, a pinch-faced architect (Henry Fonda), is seen carefully drying each fingernail on a bathroom towel. It is a sharply effective, stalling-for-time type of adverse detailing, showing the jury’s one sensitive, thoughtful figure to be unusually prissy. Unfortunately, this mild debunking of the hero is a coldly achieved detail that sits on the surface of the film, unexplored and unimportant.”

PLEASE answer all the questions, follow the analysis example pages. and site the book use 3 scholarly resources as well and make sure they are scholarly use the reference page i included. 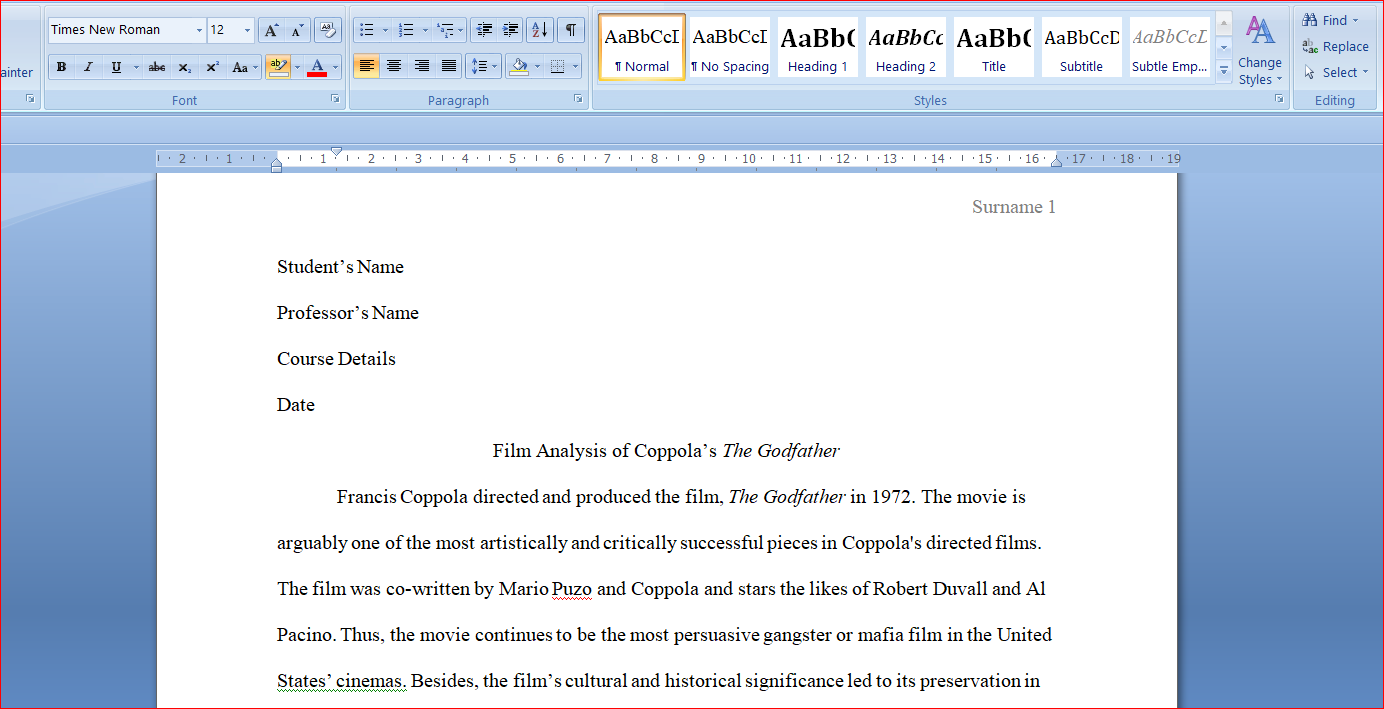