Answer the following questions on U.S Supreme Court decision. Your assignment is to read, in its entirety, the U.S. Supreme Court decision in KANSAS V. GLOVER, 589 U. S. ____ (2020) . Here’s the link to the decision: https://www.supremecourt.gov/opinions/19pdf/18-556_e1pf.pdf (Links to an external site.)

After reading this Supreme Court decision, answer each of the following questions in the order below.

Note: Cut and paste these questions and provide answers where appropriate.

Be sure to number your answers.

1) Which justice wrote the opinion of the Court? Who joined him/her?

2) The case is subtitled ON WRIT OF CERTIORARI TO THE SUPREME COURT OF KANSAS What is the meaning of “certiorari”?

3) Using your own words, give a summary of the underlying facts of the case answering these questions:

a)What was the underlying criminal charge?

c) Why was Glover pulled over?

4) Why was the original case heard in state court?

5) What happened at the Kansas District Court, Court of Appeals and Kansas Supreme Court?

6) What reasoning did the Kansas Supreme Court give for its decision?

7) How did the case reach federal court?

8) The Court on page 3 of the majority decision cites Terry v. Ohio. In a few sentences, in your own words, what were the facts of that case? Just the facts:

10) What three facts did the majority cite in the Glover case to show the officer’s “commonsense inference”?

13) What was the point of this concurring opinion?

14) Who wrote the dissenting opinion? Who joined in?

15) Justice Sotomayor wrote the following: “The Fourth Amendment permits “brief investigatory” vehicle stops, United States v. Cortez, 449 U. S. 411, 417 (1981), on “facts that do not constitute probable cause,” In your opinion, is it a good thing that the bar is lower to stop a vehicle than it is to search a house?

17) On page 8 of her dissent she writes the following: “Moreover, the majority’s distinction between revocation and suspension may not hold up in other jurisdictions.” What is her point?

18) Do you agree with the majority opinion, the concurring opinion or the dissent? Explain. 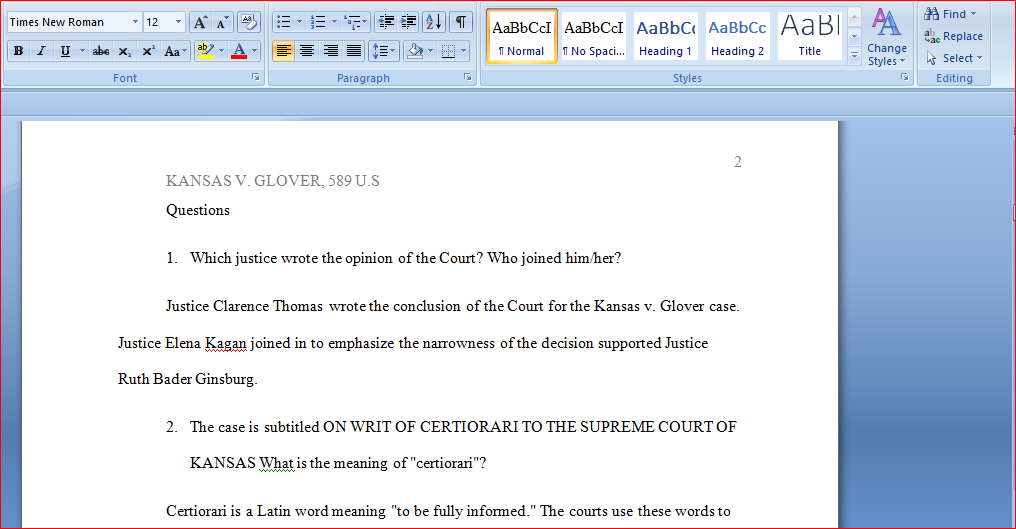