This assignment involves identification and description of a clinical question (in a PICOT format) related to the emergency department or environment. The essay explores the ideal approaches of doing cardiopulmonary resuscitation (CPR) to patients in an emergency.

Intervention (I): hands-only CPR or hands and mouth-to-mouth CPR

In the emergency environment, how effective and timely is hands-only CPR compared to a combination of both hands and mouth-to-mouth CPR at positive resuscitation outcome or death prevention?

Through evidence-based research, it is possible to analyze and describe the identified clinical problem and identify an opportunity for improving health outcomes in emergency cases involving CPR interventional approaches. Perkins et al., (2015) acknowledge that sudden cardiac arrest (SCA) is a leading mortality cause in Europe with about 55-113 per 100,000 citizens are affected annually. The authors explain that on preliminary heart-rhythm assessment, approximately 25–50% of SCA patients are suffering from ventricular fibrillation (VF); however, the percentage is decreasing. Experts point out that more patients with SCA have higher survival rate if bystanders or immediate health caregiver act promptly when the VF is still present since successful resuscitation deteriorates when the heart rhythm decline to asystole (Perkins et al., 2015). The article demonstrates that patients with cardiac arrest problem require timely CPR since most adults needing CPR due to a cardiac cause. The scholars point out that when blood flow ceases due to cardiac arrest, the blood in the arterial and lungs systems remain oxygenated for a while; therefore, resuscitation is possible (Perkins et al., 2015). A single CPR giver kneeling beside the patient doing hands-only chest comprehension with room for ventilation would likely succeed in resuscitating a cardiac arrest patient (Perkins et al., 2015). The article is relevant and appropriate for this essay since it provides the clinical foreground information about the PICOT question.

Wang, Ma, and Lu (2015) article is another literature source relevant to the current study topic. According to Wang et al. (2015), CPR is effective when there is a combination of chest compressions (Hands-only) that are interspaced with ventilation. The scholars encourage training of bystanders to use combined Hands and ventilation but not mouth-to-mouth approach. The article highlights the importance of community on the importance of increasing resuscitation outcome through chest comprehension intervention. The researchers recommend CPR education and intervention for effective resuscitation (Wang et al., 2015). The authors emphasize pointed out that, “hands-only” CPR for emergency providers or bystanders who are not trained to provide rescue breaths is helpful (Wang et al., 2015). The article is relevant since it emphasizes on the effectiveness of hands-only intervention compared to the combined effort with mouth-to-mouth approach. Atkins et al. (2015) confirm that conventional CPR, chest compressions and rescue breaths, are mostly applicable for children cardiac arrests. However, the authors reiterate that compression-only CPR is effective for adults with a cardiac event when first aids providers are unable or unwilling to give mouth-to-mouth CPR, the scholars recommend hands-only CPR for victims of cardiac arrest (Atkins et al, 2015). Atkins et al. (2015) article are relevant to this study since it provides pertinent information about the clinical problem and identifies an opportunity for improving health outcomes of patients in an emergency.

Nolan and Soar (2010) conducted a meta-analysis of data that was pooled from randomized trials of more than 3,000 patients. The result s showed that hands-only (chest-compression-only) CPR was linked to the improved opportunity for resuscitation outcome compared with conventional or standard CPR (Nolan & Soar, 2010). Statistically, the study showed that relative chances of resuscitation and survival increased by 22% from 14% when hands-only CPR intervention was used. The authors explain that dispatcher-assisted CPR encourages the use of chest comprehension only to the conventional strategy of mouth-to-mouth ventilation combined with hands-only CPR (Nolan & Soar, 2010). The article is relevant since it provides evidence-based data to support the effectiveness of clinical intervention highlighted in the clinical question.

Kitamura et al. (2011) article is the fifth article that was found to be relevant to this essay since it addressed the clinical topic or question being investigated. The article compares the time-dependent effectiveness of hands-only and standard CPR for an adult of out-of-hospital cardiac arrest (OHCA). Approximately 55014 bystander-witnessed OHCA, out of the population, 22.1% (12165) received hands-only CPR and 19.7% received conventional CPR (Kitamura et al., 2011). The results show that for short time period of OHCA, compression-only CPR was more effective and fast since the rate of survival was favorable than conventional CPR. The study acknowledges that both hands-only and combined intervention CPR is effective; however, compression-only is more effectively and timely (Kitamura et al., 2011). On the other hand, the article showed that conventional CPR had a higher rate of survival than no CPR, adjusted, and compression-only CPR.

All the five articles are ideal for answering the PICO question effectively. However, it is possible to identify the best one that supports nursing intervention for the topic. Kitamura et al. (2011) article are the best since it provides an in-depth analysis of the topic with evidence-based results. The article provides evidence-based data just like Nolan and Soar (2010) research; however, its in-depth analysis of the issues makes it better than the latter. It is better than the other three articles due to a proper comparison of the intervention strategies highlighted in the clinical question. Therefore, it best fit to answer the PICO question due to its evidence-based data and comparison of the clinical interventions.

The essay has been instrumental in exhibiting the knowledge acquired during the module since it provided an avenue to draft a clinical (PICOT) question that is relevant to the area of work. In addition, it was possible to link between research and the implementation of evidence-based practice for the nursing profession. The clinical problem was identified as the risk of acute cardiopulmonary arrest on adults and the intervention plan was the resuscitation process through hands-only CPR versus conventional CPR intervention plan. Five peer-reviewed articles were selected to provide empirical data on the research topic. The articles were reviewed based on the content relevancy to answer the clinical question appropriately. The articles provided evidence-based data that could be used to improve the health outcome of patients needing CPR. The results show that hands-only CPR is more appropriate in emergency cases where bystanders are giving first aid to adults suffering from cardiac arrest. Use of compression-only approach is identified as effective and timely. However, use of conventional CPR is also found to be effective in the resuscitation process. The best article was selected based on its evidence-based data and in-depth analysis of the data.

Answer preview for analyze and describe the identified clinical problem 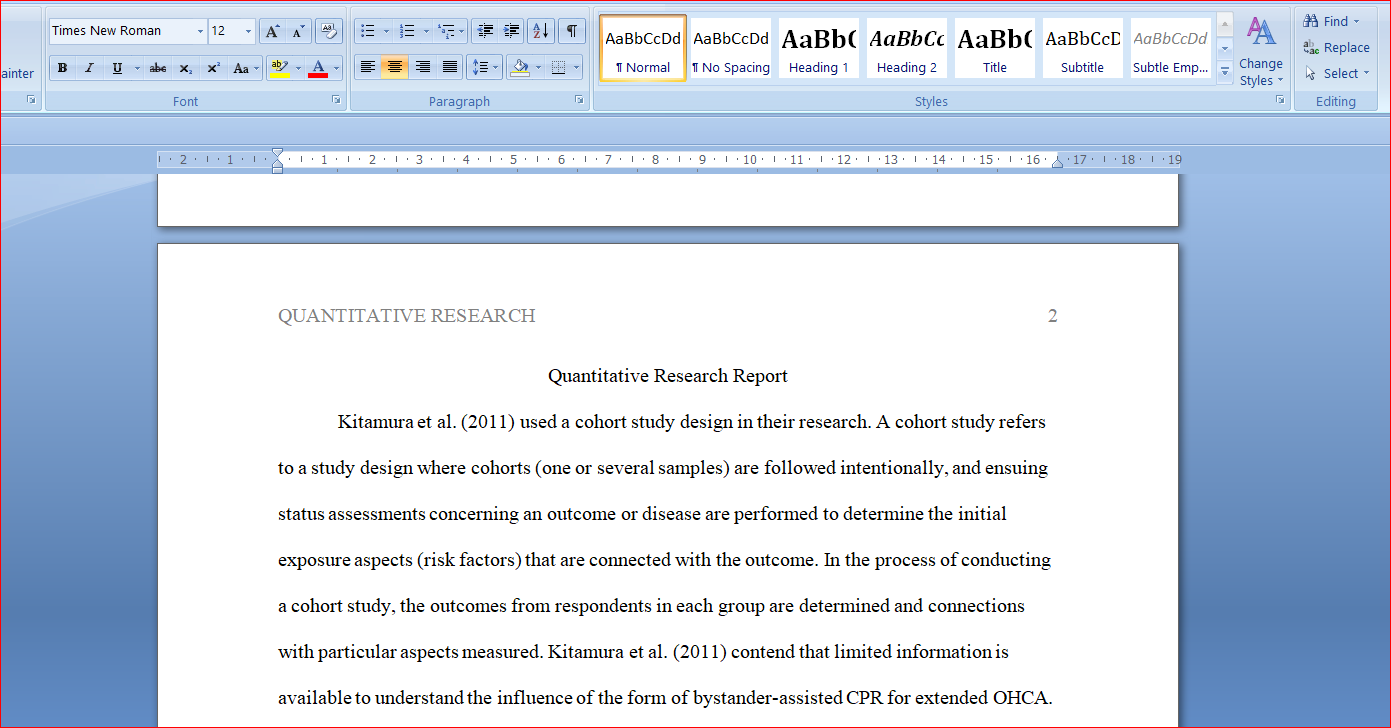